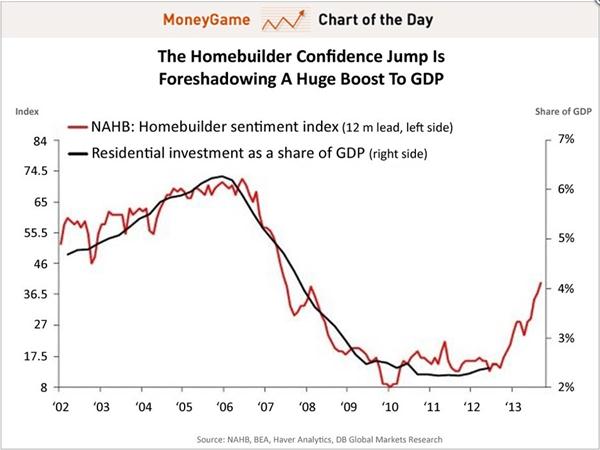 A weak housing market often gets blamed for the Great Recession as well as the anemic economic recovery.
But, if the pattern portrayed in the accompanying chart holds, housing should, as it always has, come to the
economy’s rescue.

With NAHB’s Home Builder Sentiment Index at 47 (the highest level since 2006), it’s reasonable to assume
that housing’s contribution to GDP should move back to its traditional average of about 5%. That percentage
was as low as 2.5% in 2010, when the Index was at 8, an all-time low, and it was as high as 6.2% when the
Index peaked at about 75 in 2006.

Economists now see housing generating up to 20% of overall GDP growth in QIV 2012. GDP growth means jobs;
jobs mean a stronger housing market; and that means more jobs and so on and so on, which means the end of
the vicious economic cycle triggered by housing’s collapse and the real start of a robust recovery.

Exceptional breathtaking view with proposed layout for hilltop placement of your dream home. The perk test is done with approval for 3 Bedroom’s. See doc’s for layout and set backs. This is an amazing opportunity to be close to Highway 15 and Pala Mesa Golf Resort, but in a custom community. All services are nearby….